The project rescues animals that have been injured or mistreated and seeks to rehabilitate and re-release the animals or provide a home as close to the natural environment as possible.

You will support the team in caring for the monkeys, bears and other wild animals at the centre. The extra support from volunteers is crucial to ensure that every animal receives the optimum level of care. By spreading the word about the use and abuse of animals on their return, volunteers act as ambassadors for the project, raising awareness of these issues and what can be done to help them. You can also combine this role with the Elephant Care project.

Explore the beautiful local area and vibrant night market in the popular destination of Hua Hin. Visit one of the nearby national parks and see some wonderful wildlife!

Help the Wildlife Rescue team to care for animals in need.

There are currently over 700 rescued animals at the wildlife sanctuary including over 300 primates, 24 elephants, over 30 bears, tigers and a variety of other small mammals, birds and reptiles. There are two separate volunteer roles  - Wildlife Rescue (all the animals excluding elephants) and Elephant Care - you can choose to either specialise in one role or combine the two.

The Wildlife Rescue aim is to re-release the animals or ensure that they spend the rest of their lives in a sanctuary as close to their natural environment as possible. The centre is making a big impact and and has one of the highest re-release rates in Thailand as well as actively campaigning for better animal treatment including issues such as the illegal pet trade, poaching and the use of animals within the tourist industry.

Volunteers are also allocated other shared duties including cleaning the dining area and caring for the rescued dogs on site. For the dogs, this means helping on bath days, feeding and removing ticks. Some dogs may have poor skin conditions, which is common in Thailand.

You will generally work in small teams with a team leader (usually another volunteer) although you will often not be directly supervised and are expected to be able to work independently. You will learn most things whilst doing them. For your own and others safety, you must be aware of the risks and follow all instructions.

“The passion and commitment shown by volunteers allows the centre to run smoothly. Their love for animals allows us to continue to rescue and rehabilitate animals that have been forced into the tourist industry or kept as pets.”
Becca, Volunteer Coordinator

Volunteers work a 6 day working week from about 6.30am-5pm on a rota basis and a working day typically follows this schedule:

In the first two days, you will have a half day induction and tour of the centre, as well as a health & safety briefing.

Volunteers live on site, a short walk away from the animals. There are many exciting free time activities locally including 3 national parks to explore!

The Wildlife Rescue role has a strict ‘hands off’ policy in place for the welfare and safety of both animals and volunteers. The less contact the animals have with humans the more likely they will be able to express normal behaviour and have the potential to be released back into the wild. Touching the animals also increases the risk of disease transmission between animals and humans as well as the risk of being injured by an animal.

There are usually 15-30 volunteers on each role with a maximum of 70 in total, but this varies considerably throughout the year.

You will be supported by the local team at the centre which includes several international and Thai co-ordinators who are responsible for managing volunteers and the daily work of the wildlife and elephant teams.

Accommodation is provided in simple shared rooms located in the centre grounds and there are separate shared bathrooms. 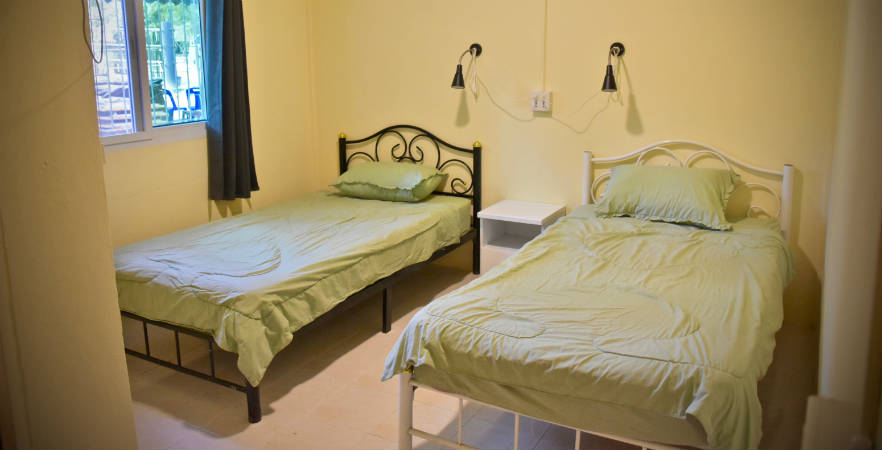 There is a large open air communal dining area where volunteers have meals and can relax in the evenings. There is WIFI in the dining area too, for volunteers to use. 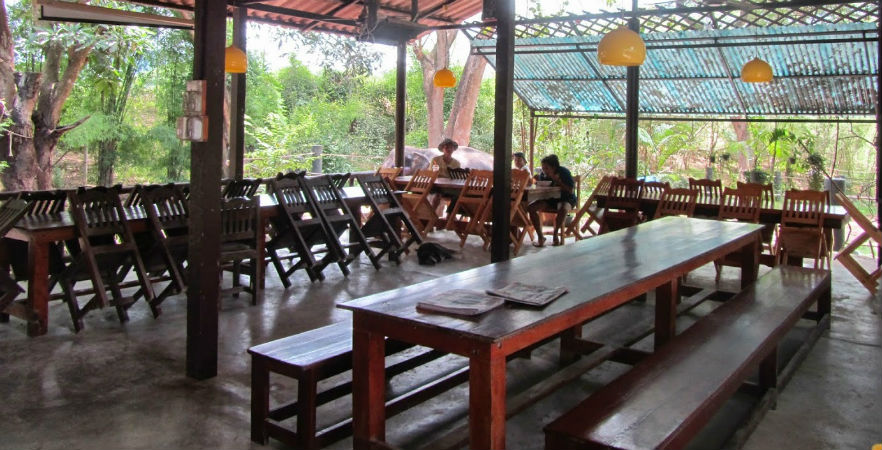 Main meals are included and are prepared by Thai cooks. Here are typical examples of the food you will have:

Every meal includes a vegetarian and vegan option. If you have any allergies or specific dietary requirements please let us know in advance and we will check if these can be catered for.

There is a small bar open from 5-7pm where you can buy snacks, soft drinks, coffee, smoothies and some alcoholic drinks.

Drinking water is provided on site from water dispensers where volunteers can fill up their water bottles throughout the day.

You will need to fly into Bangkok (BKK). We can arrange for you to be met on arrival and be transferred from the airport to the project, which takes about 3 hours.

The centre is located in a tropical region about 3 hours south of Bangkok. Situated on temple grounds and just outside a small village, it's a fairly remote location and a peaceful and beautiful environment. There is a lake opposite the centre which has a series of small ‘gibbon islands’ used to rehabilitate the gibbons.

In the local village (10 minute walk away) there are cash machines, a couple of minimarkets selling basic items such as toiletries and snacks, and small roadside restaurants.

There are two bigger towns, Cha Am and Hua Hin (45 mins-1 hour by taxi). Both these towns are on the coast of the Gulf of Thailand and are popular beach resorts. 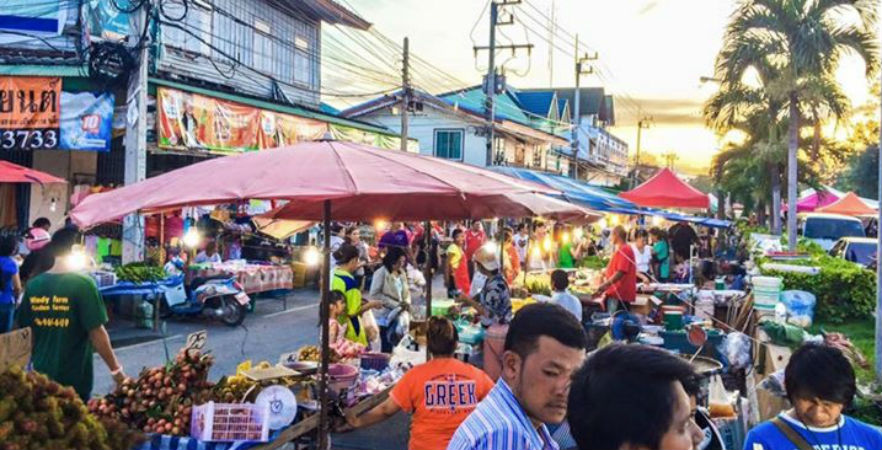 In the evenings volunteers often sit and relax in the open communal area and there is a bar where volunteers can buy drinks, snacks and smoothies. Volunteers may also choose to go to Hua Hin where there are bars, restaurants and a bustling night market, ideal for souvenir hunting! There is also a weekly night market in Cha Am selling clothes and local foods.

There is a small resort with swimming pool and Thai massage treatments available nearby (20 minutes by taxi) which is very popular with volunteers on their day off. There are also three national parks which you are able to visit; Kui Buri National Park, Kaeng Krachan National Park and Khao Sam Roi Yot National Park. These activities are best booked locally once you are at the project.

Thailand has a tropical climate and throughout the year it is hot, with temperatures generally between 25-33˚C. There can be tropical rain showers at any time of year but the main rainy season is from June to October when there are brief but frequent heavy rain showers.

Travelling in Thailand before or after your placement

Thailand is often referred to as the ‘land of smiles’ and is a huge attraction for travellers from around the world due to its glorious beaches, tropical climate, great food and fascinating culture. Thailand has something to offer everyone and popular activities that you might like to combine with your volunteer project include:

For more information on Thailand and some of the things we loved when we visited there please see our Thailand country page. This also features all our other Thailand volunteering projects as you might like to consider combining this project with one of the others we offer to make a trip of a lifetime! 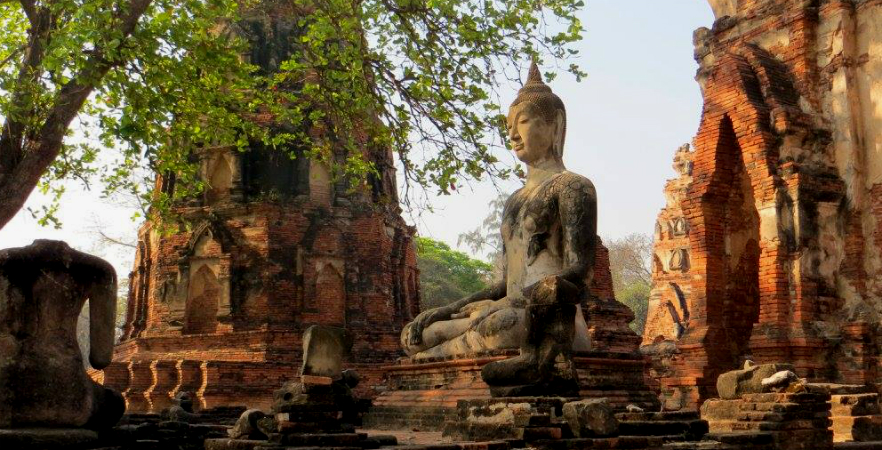 Start dates are every Sunday.

"I stumbled across Pod Volunteer quite by accident and whilst I was looking for a holiday at the time I hadn't considered a holiday like this, to be honest I didn't even know such opportunities existed. However once I saw what was on offer I was hooked. I booked almost straight away and from that point forward felt fully supported, and as a lone traveller that was important.

That support continued once there, the local team were great and the other volunteers were welcoming. Working with the wildlife was a fantastic experience and really rewarding. The animals all have such sad stories but being able to help give them a better future felt great. The work was physically demanding, and the days quite long but for me, who works at a desk, it was just what I needed.

As well as the animals I met some super people both volunteers and staff. I have made friends with people from all over the world and I hope to sustain those friendships.
It was a fantastic experience, I would do it again and recommend it to anyone who wants something a bit different, a challenge and an opportunity to make a difference."

"This trip has been a once in a life time experience. The volunteers and workers at the centre are doing an amazing job and I feel blessed to be able to be a part of it. Some of the work is hard but in a weird way because everyone’s having a laugh and getting stuck in it becomes very enjoyable. I met some amazing people from all over the world and formed really strong bonds. I would recommend Pod as through the experience they’ve maintain a professional high standard and made everything stress free. They were also more than willing to help out with any issue I came across. Everyone should have an experience like this at least once in their lives."

"I absolutely loved it! Working with such a variety of animals every day, meeting so many lovely people- I knew I would enjoy it but it exceeded my expectations.

It's so worth it and you'll have an amazing time. Definitely do not expect a luxury experience, but if you've come for the wildlife then you're in the perfect place."

"My Pod Volunteer Specialist was Iona and her assistance couldn't have been better! She answered all of my questions, allowing me to travel with less to worry about.

I spent 2 weeks at the Wildlife Rescue Centre looking after animals such as the macaques, gibbons, lorises, civets, otters, pigs etc. Here we prepared their food, cleaned their enclosures, made them enrichments and participated in 'special projects' which included scrubbing pools. All of these activities helped to ensure that all of the animals are living their best life, with the ultimate goal of releasing them back into the wild. It was great to see how hard each volunteer worked every day, despite the long working hours. All of the volunteers had a similar passion for animals and their welfare!"

years rescuing, caring and campaigning for animals in need in Thailand

Reserve your place and start your volunteering adventure to Thailand!