The project focuses on sea turtle conservation on the beautiful Greek island of Kefalonia, by monitoring and protecting the island’s endangered loggerhead sea turtles.

Volunteers get involved in a range of hands on conservation activities such as surveying nesting beaches, observing and identifying turtles, measuring light pollution and rescuing hatchlings. These support the project’s work to identify and reduce the threats to the turtle population.

You’ll be living on the friendly island of Kefalonia, with its sandy beaches, rugged scenery and surrounded by the warm crystal blue waters of the Ionian Sea.

Join the team and help save the sea turtles of Greece from extinction.

Every year loggerhead sea turtles migrate to Kefalonia to feed and reproduce, with female turtles laying their eggs on the sandy beaches of the island. Unfortunately the turtle population is now under great pressure from both human and natural threats and has become endangered.

Volunteers support the work of the local conservation team and tasks may include:

All of these tasks help to directly protect the turtles as well as continuously improve the project’s conservation methods to improve the chances for Kefalonia's sea turtle population.

Learning is hands on and you will gain knowledge, practical experience and skills on a range of research and conservation practices.

You should be comfortable riding a bicycle, as this is the way you will travel to different nesting beaches in the mornings. The bikes are also a great way to get around locally!

“Without the help of volunteers we wouldn’t be able to carry out all the resource intensive daily research and observation required to understand and put in place measures to help protect this special species of loggerhead turtles”
Chanel, Program Director

In your first week you will have field training sessions to allow you to understand more about sea turtles and the scientific methods being used. You will be trained on procedures and techniques to ensure the quality of data collection and the welfare of the turtles.

Working days start early and usually begin by cycling to nesting beaches at sunrise to identify and record fresh sea turtle tracks and nests, or observing the behaviours of sea turtles swimming in the bay. Afternoons may involve measuring changes in beach width and slope, collecting plastics from beaches and you will spend some evenings and nights on the beach to measure light pollution, tag nesting turtles or rescue hatchlings in danger. Work is split into shifts and volunteers normally work 2 shifts per day.

During your free time, you can explore the many attractions of island or simply relax on the beach near the volunteer accommodation!

During nesting season volunteers usually get involved in finding and protecting nests. Then during the hatching season, the work transitions to hatchling rescue and completing nest inventories.

At the start of the nesting season (May and early June), and at the end of the hatching season (October), surveys focus mainly on the harbour turtle population where you will observe and record information on the turtles who swim near the harbour front.

The project has two different Field Stations, each with its own volunteer accommodation and a research focus in different parts of the island.

Field Station A covers surveying beaches during the day as well as monitoring an active harbour where sea turtles come to feed and interact. The beaches visited do not have night surveys.

Field Station B focuses on beaches and includes night surveys in the nesting season where volunteers walk the beach for the entire night and may get to see nesting sea turtles.

There are up to 26 volunteers based at each field station.

You will be working alongside the local team, including field leaders and assistants. Staff live alongside volunteers in each field station.

The project has two different Field Stations, each with its own volunteer house. The houses have simple furnishings and several communal cooking areas. Volunteers share bedrooms which mostly have bunk beds and there are shared bathrooms. 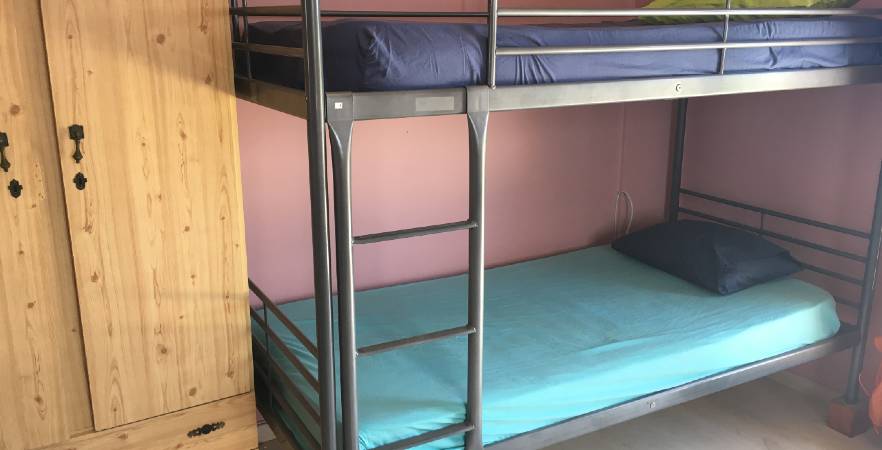 Each house has a large balcony, perfect for group gatherings and evening meals. 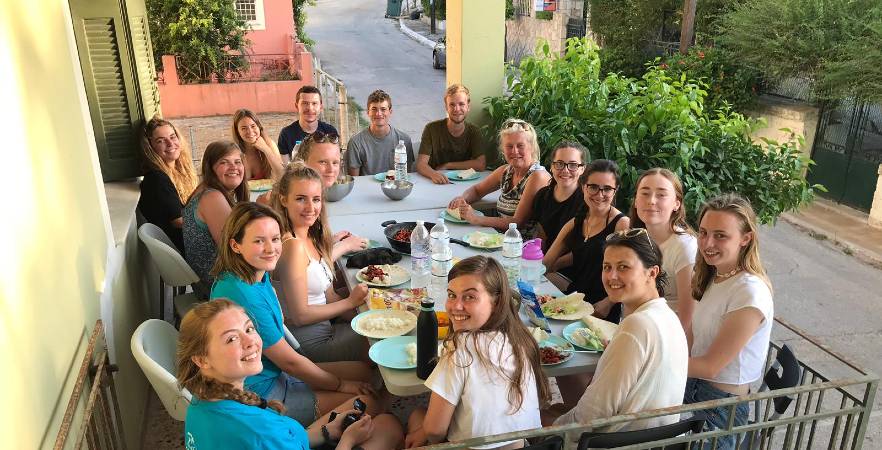 Meals are not included in this placement. Volunteers prepare their own meals and are able to buy groceries locally. You may also like to visit some of the local restaurants or order some souvlaki (traditional grilled kebab) for an evening meal on the beach!

There are vegetarians and vegans options available, including vegetarian souvlaki!

The water in Kefalonia is safe to drink or you can buy bottled water.

Kefalonia is an island in the Ionian Sea, west of mainland Greece. The field stations are in beautiful locations near the nesting areas being monitored and near to the beach which you can visit to swim, sunbathe, and relax during your free time. 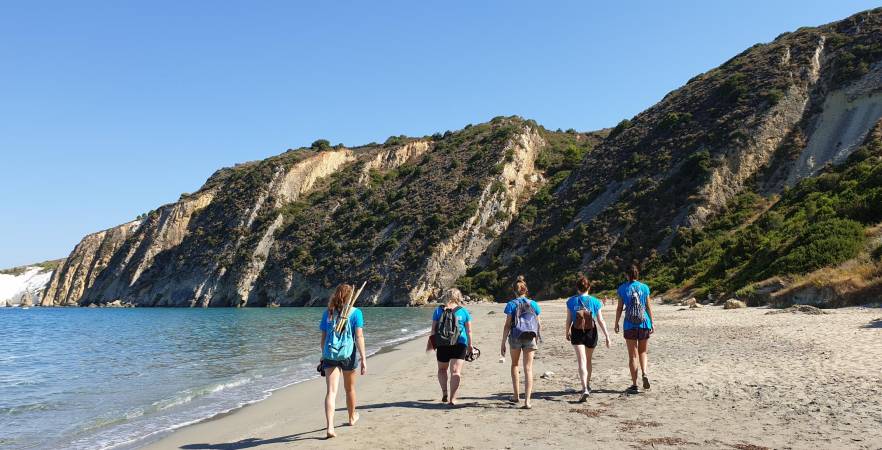 When not working, volunteers enjoy socialising together and regularly have movie nights, quiz nights and get creative with henna designs. It’s also nice to head into town and have a meal out and even try out some Greek dancing!

Volunteers work a full first week during their training and then have 1 day off per week thereafter to explore the island.

Field Station A is a short walk away from many of Kefalonia’s beautiful beaches and is located near to the airport. There are beach bars and restaurants which you can walk to and a mini-mart and café where you can buy food. You can take a taxi into the main town of the island to find larger shops, tourist shops, cafes, bars and restaurants.

Field Station B is located on a peninsula across from the main town and is close to a quaint square where you can walk to enjoy several restaurants, bakeries and cafes. To explore other parts of the island you jump on a ferry into the main town which runs frequently and takes about 30 minutes, a nice way to travel!

Travelling in and around Kefalonia

For more information on Greece and some of the things we loved when we visited there please see our Greece country page. 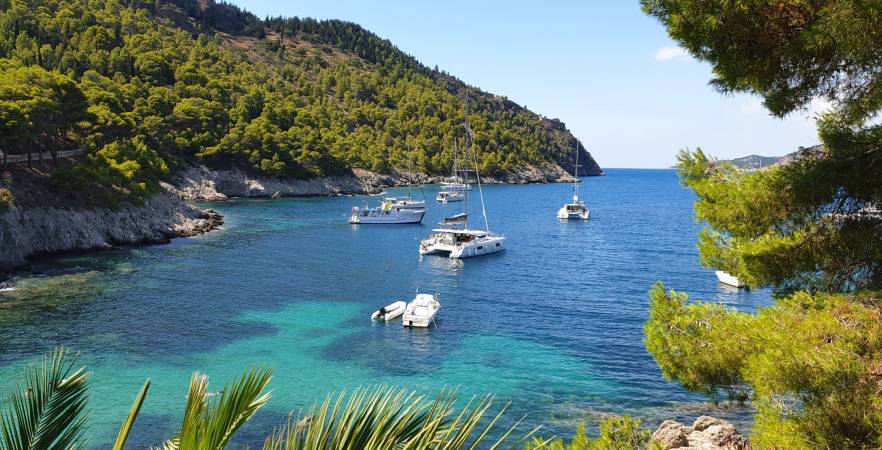 Kefalonia has a Mediterranean climate with mild, rainy winters and dry, hot summers with long sunny days. From May-October, temperatures range from around 24 to 30+ °C, peaking in July and August.

"I was quite nervous coming here on my own, but everyone was so welcoming and I immediately made friends with other volunteers. The work itself was exhausting, but so rewarding at the same time. I really felt like I was making a positive impact and my work was needed. My favourite thing were probably morning surveys on airport beaches because I got to see so many hatchlings there! It’s such an amazing feeling that some hatchlings only made it to sea because of us.

I also really enjoyed exploring the island by car with other volunteers on my day off. Sleeping on the beaches was also a unique experience. I think I will be able to sleep anywhere after this!

All in all, this was probably one of the most memorable experiences of my life so far and I’m so grateful for the amazing friends I’ve made and the meaningful work I could do here."

"I never thought I would be able to be so close to a turtle in person and actually be able to play a part in their conservation first hand. Also, never thought I’d be able to meet such like-minded people. This has really helped me learn a lot about myself from this experience to … and not giving up.

I have loved every moment and all the people I will miss all of you so much. I think this project will also really help towards my degree in Marine Biology."

"It took nearly a week before I saw my first turtle, but as i watched over 60 pour out of a nest, I knew i was involved with something bigger and more important than me. I made several lifelong friends and I'm thankful I got to spend time doing someting I love with people who felt the same way."

"It has been one of the best experiences I’ve ever taken part in, it was beyond anything I could have imagined it would be. At first I didn’t know what to expect, but everyone was so lovely and ensured that I knew exactly what I was doing. I have enjoyed every moment of this incredible experience, but for me the highlights of the trip have been releasing a rehab turtle, relocating lots of nests, scuba diving with a turtle and exploring the beautiful island.

It has been a pleasure to work alongside the most amazing and passionate people from whom I have learnt so much. Without clear guidance and the amazing skill sets from the leaders I would not have gained as much."

“I have never enjoyed anything so much in my life. Working with the loggerhead turtles has been amazing and has taught me so much about them. My highlight of the holiday was swimming a hatchling out to sea and watching it swim into the distance knowing you helped it!”

"This has really been a life changing experience. All the activities and all the people I got to meet just made this two weeks unforgettable. I have to say that the most memorable time was during my first night survey when we saw a turtle coming out of the water slowly but surely making its way up on the beach trying to find a place to nest."

"These past two weeks have been absolutely incredible. I came to get some experience doing field work and conservation and have left with so much more; lifelong friends and a new found love for turtles. The assistants are all so lovely and made sure to help me out wherever necessary. Everyone is so dedicated to the project and I feel honoured to have been part of it. You get a real sense of what field work is like and learn a variety of skills doing so. Seeing so much turtle stuff in 2 weeks was an absolute pleasure and I fully intend on returning."

"First look at the house and staff was really good. I felt like I was welcome. The talks were really long but were told with so much excitement and you learn so much from them. The group we had was great, everyone seemed to get along with each other. I got new friends really fast. I really liked the harbour, seeing turtles, watching their behaviour and telling tourists about them. The beach was also amazing, searching for tracks, digging in holes, finding eggs and sometimes relocating them. It’s an adventure, with learning, fun, new friends and seeing and doing cool stuff."

hatchlings helped to sea in 2020

We look forward to receiving your application! There is no commitment by applying and we will send more information.