Volunteer at a research and education centre working with local communities and government to research and conserve local wildlife, including endangered sea turtles.

In turtle season, you will be helping to monitor and protect Olive Ridley sea turtles which come to nest on the beach by the centre and are in danger of extinction. The team also run a number of active scientific research projects throughout the year on the local wildlife, including monkeys, birds and crocodilians so it’s an amazing opportunity to get involved in their important work and immerse yourself in Costa Rica’s wildlife.

The reserve is located on the Southern Pacific Coast of Costa Rica. It’s famous for its biodiversity which you can enjoy in your free time, with stunning beaches, rivers, waterfalls to explore and two national parks nearby with many activities such as zip lining and horse riding.

You will be volunteering at a non-profit biological research and education centre formed by community members and Costa Rican scientists. They have a number of active projects:

On the South Pacific beaches (west coast) of Costa Rica there are three species of sea turtles which can be seen nesting at different times of the year: Olive Ridley, Green and Leatherback, which are all in danger of extinction.

The beach in the reserve where you will live and work is mainly an Olive Ridley turtle nesting beach and you will have the opportunity to learn about the biology of these incredible sea turtles. The turtle season runs from July to January and volunteer activities include:

You will work with experienced staff members, who will show you proper scientific methods for working with sea turtles, hatchery work, handling nesting females, eggs and data collection.

Due to the threats of poaching, erosion and tides, most nests are moved to the reserve’s protected hatchery. Important data about the turtles’ nests is gathered, including the incubation period, nest temperature and environmental factors.

June to August is the start of the nesting season, which continues through to December. Nesting activity peaks in September and October, when it’s usually possible to observe an individual turtle nesting every other night, and sometimes up to 2-3 at a time. The first baby turtles normally hatch in September and from December nesting starts to decrease.

Birds – bird watching survey walks are conducted 2-3 times a week in the morning and evenings. You will learn how to identify and record birds in the forest and surrounding areas, including the resident population of Scarlet Macaws.

Monkeys – surveys are carried out twice a week in the forest, looking for troops of the Capuchin monkey and Howler monkeys. Observations are undertaken including population, if they are carrying babies, behaviour and their location is recorded using GPS.

Bats – Costa Rica has 114 species of bats and the team monitor the use of habitat and activity of bats within the forest, surveying bat houses and the bat population.

Other mammals – the reserve has about 15 species of mammals, including ocelots, coatis, raccoons and tayras. Many of these are very elusive so the team look for evidence of activity (burrows etc.) and use camera traps which are checked weekly.

Crocodilians – the team monitor American crocodiles and Caimans through night surveys by boat every 2 weeks, collecting information on their population, distribution and relationship with the environment.

Reptiles (snakes) and Amphibians – survey night walks are carried out 1-2 times a week looking for snakes which have an important role in the eco-system as predators. Location and habitat are recorded and snakes are captured for further data collection and then released. An inventory of frogs, salamanders and other amphibians is also made.

The team engage the local community through outreach activities such as beach clean ups and summer camps. They also have a butterfly garden which is used as an ‘open classroom’ teaching locals about ecology. Volunteers help with collecting and identifying butterflies, planting, transferring pupae and larva, and data collection.

“Your support is vital to implementing, maintaining and growing our programmes of research and education to help conserve Costa Rica’s natural resources.”
Oscar, Director

In your first few days you will receive an induction to the centre, training about the research activities, how to use the equipment, and the work you will be doing.

In turtle season (July to January) – volunteers normally start around 8am and regularly monitor to check if the nests are safe and to see if baby turtles have arrived! You can also take part in monkey and bird surveys during the day.  After dinner, volunteers do night shifts, walking the beach to monitor the nests.

Out of turtle season (February to June) – the day varies depending on the activity being undertaken. It may include birding in the early morning (around 6am), monkey surveys and there may be night monitoring of crocodilians or night walks looking for reptiles and amphibians.

Volunteers normally work 5.5 days per week with 1.5 days free time when you can relax on the beach, explore the local area or get involved in one of the many tours and activities nearby such as zip lining, horse riding, snorkelling and diving.

There are up to 15-18 volunteers at the project although this varies throughout the year.

You will be working alongside the local team which is made up of local and international staff and scientists. You will be overseen by the project director and supported by a volunteer co-ordinator.

Accommodation is within the research centre, and you will have your own room. Each room has a fan, storage, drawers and mosquito screens on the windows. Bathrooms are shared and have hot water showers. 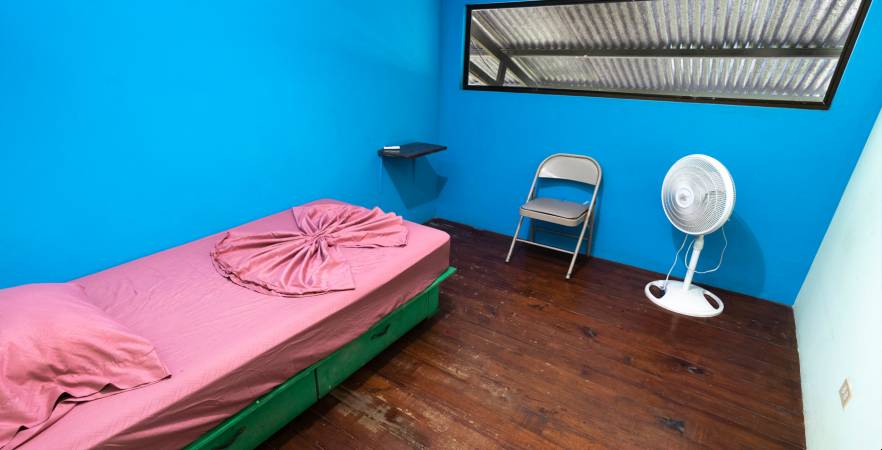 There are common areas for eating and socialising in and lots of hammocks to relax in! WIFI is available. 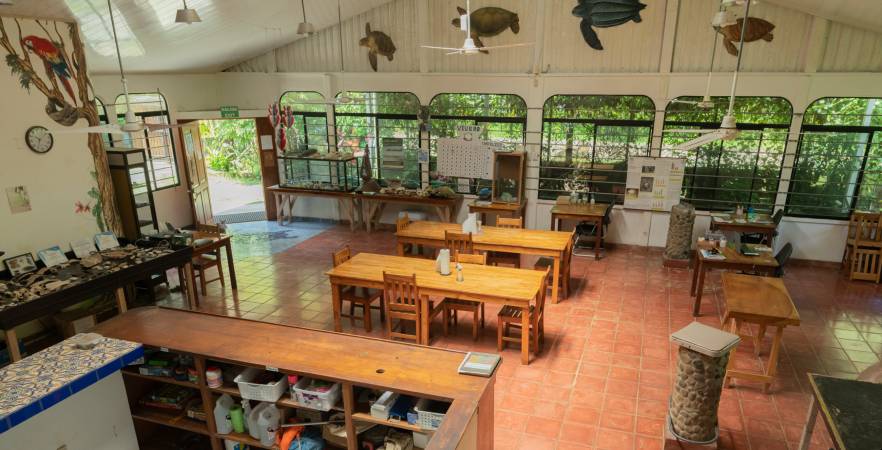 Vegetarians and vegans are welcomed and can be catered for.

The tap water in Costa Rica is safe to drink.

The reserve is located about 3.5 hours from San Jose, in the Puntarenas Province on the Southern Pacific Coast of Costa Rica. It’s an unspoilt and beautiful region, famous for its incredible biodiversity.

The research centre is located by the beach and there are rivers and waterfalls to visit nearby as well as other beaches to explore. There is a village within walking distance with restaurants, a couple of supermarkets, shops and bars to enjoy when you aren’t working. 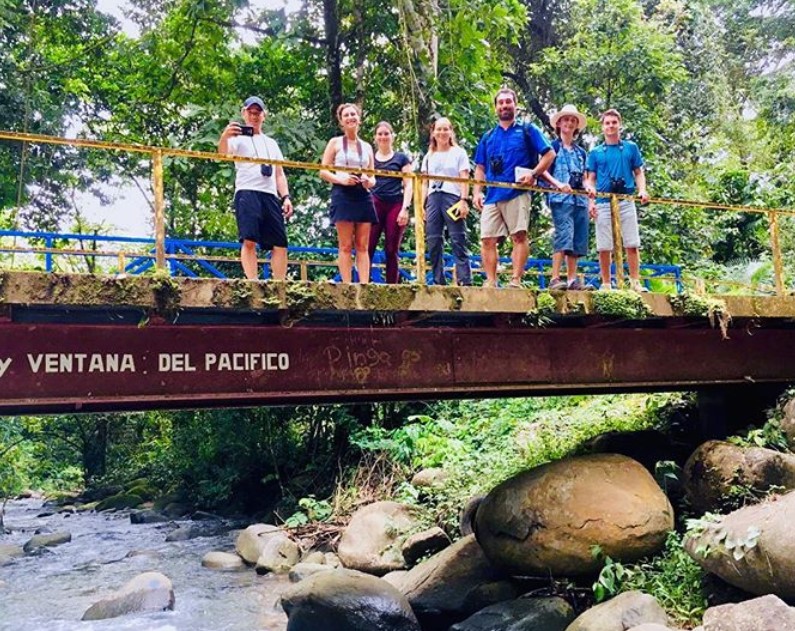 In your time off, you can relax on the project’s own beach, head into the village, or there are many tours and activities to choose from, such as surf lessons, horseback riding, zip line tours, photography lessons, hiking, snorkelling and diving.

The centre is also ideally positioned to explore some of Costa Rica’s best national parks, with Marino Ballena National Park and Manuel Antonio National Park within an hour’s drive.

Travelling in Costa Rica before or after your placement

For more information on Costa Rica and some of the things we loved when we visited there please see our Costa Rica country page. This also features all our other Costa Rica volunteering projects as you might like to consider combining this project with one of the others we offer to make a trip of a lifetime! 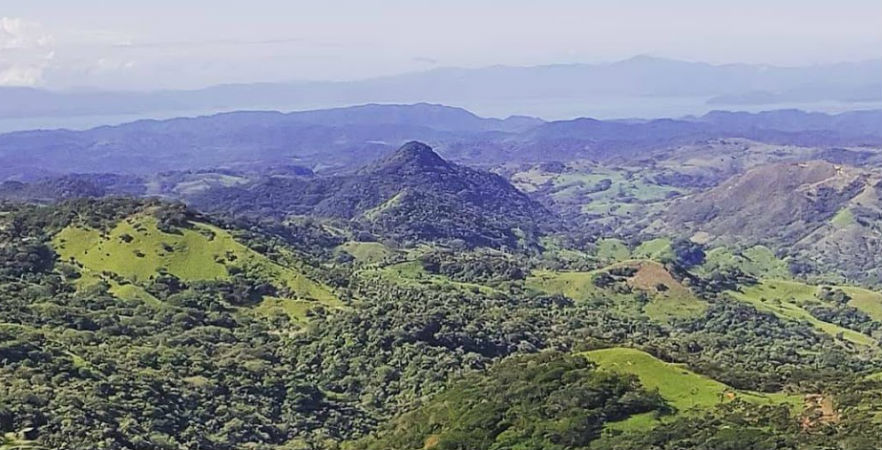 The Puntarenas province has a tropical climate. Temperatures are warm throughout the year and average between 20-30˚C but due to the humidity (80%+) it can feel much warmer. There can be tropical rain showers at any time of year but the main rainy season is from August to October and the heaviest rainfall coincides with the peak in turtle nesting activity seen in September and October.

You can start on any date. Wildlife projects run throughout the year apart from sea turtle conservation, which runs from July to January.

"I had an amazing experience at the reserve. I was nervous at first as I had never done anything like this before but everyone made me feel so welcome. We got stuck into the amazing activities right away, within an hour of being there we had met our first baby turtle. It was unreal. On top of the amazing activities with turtles, butterflies, crocodiles and birds we had the daily experiences with lizards and howler monkeys! The community feel at the reserve was what really made with experience, cooking and eating together discussing the days findings."

“I got the opportunity to be involved in bird observation walks, shark surveys, late night beach patrols looking for nesting turtles, releasing newly hatched baby turtles, snakes walks, maintaining a butterfly garden, crocodile / caiman searches, and more. I will never forget the humbling experience of watching a female turtle come up the beach and lay her eggs.”

"Our family has learnt so much and the work that you do is incredible. We’ve all felt so sad since leaving, the kids are already asking to come back again. There were so many highlights but releasing baby turtles into the sea has to be at the top, closely followed by night-time snake hunts, monkey walks, work in the butterfly garden, spotting a coati and meeting a red-eyed tree frog! It’s a true community and we feel privileged to have been a part of it."

“My volunteering placement with the turtle project in Costa Rica was all I had hoped for and more. From the beginning, Pod gave me excellent support in answering the questions I had about the placement and how to prepare for it. They contacted me at the strategic points in the planning process to check that all was well and ask if I had any further questions and were always responsive and helpful when I did. A truly once-in-a-lifetime experience!”

“I had an absolutely delightful experience at the Turtle Conservation project. A gorgeous beach, nice accommodations, good food, and great group of people. I've worked as a research assistant at a loggerhead turtle nesting site, so I've had a similar experience. But the joy of seeing these tiny Olive Ridley hatchlings make their way to the ocean, overcoming the surf and fighting for survival is something I could experience many times over with equal emotional impact.”

We look forward to receiving your application! There is no commitment by applying and we will send more information.