Volunteers work in a small group of up to 5 alongside a knowledgeable team of field and research staff. Getting out into the African bush on the back of 4x4 vehicles, you will help the team with their vital tracking and monitoring activities as well as other wildlife you may encounter, including the Big 5.

You will have the chance to live and work on one of 5 unique reserves in the KwaZulu-Natal province of South Africa, surrounded by the African wilderness and its fascinating wildlife!

Join this project and make a real difference to the protection of endangered animals in Africa.

The project supports vital conservation work by providing wildlife monitoring to under-funded reserves in South Africa. This makes an invaluable contribution to the protection and conservation of endangered species including the African wild dog, cheetah, lion and black rhino.

You will be involved in the daily monitoring and conservation activities of these species, which includes:

There will be a focus on monitoring specific wildlife and so the team may need to drive large distances if the animals are harder to find or located far from the project base. Being out in the field on an open vehicle you are immersed in an African game reserve and you may encounter other wildlife on your drives such as buffalo, vultures and elephants!

Occasionally you may have the opportunity to help in other roles including tranquilising and tagging of animals, collaring, relocation and reintroduction, night tracking and plant control. This depends on the needs of the reserves and it can’t be predicted when this will take place.

If staying longer than 2 weeks you will have the opportunity to work on different reserves, transferring to a new location after each 2 week cycle. This gives you an amazing opportunity to work with different teams, research objectives and environments. You can learn more about each reserve here.

The project works in conjunction with internationally recognised organisations such as the WWF and Endangered Wildlife Trust as well as the local conservation authorities. It has won multiple awards for its work and is Fair Trade Tourism certified.

"The primary function of our teams is to provide vital monitoring and animal tracking services for the reserves which would not be able to take place without the ongoing commitment of volunteers!"
Johan, co-founder of the project

Volunteers start early and leave camp before sunrise (around 3am - 6am depending on season) on the back of an open 4x4 vehicle.

The first task of the day is to locate the animals being monitored using the radio telemetry equipment that tracks radio collars on the priority species. Once sighted, the team then observes and records data on them.

Generally around the middle of the day when it’s hot and the animals are less active, you will return to base where you will have lunch and time to rest before heading out again to conduct further monitoring. Then you will return to base to prepare supper and relax during the evening, often sitting out and listening to the sounds of the African bush!

Once a week, you have a day at the research base doing data input and analysis, which provides highly valuable input to the management of priority wildlife species on the reserves and is shared with the local conservation authorities. This day is also usually used for jobs such as cleaning the vehicle!

There is also normally one day a week when there isn’t conservation activity scheduled for volunteers, an opportunity to restock food supplies and relax.

Each 2 weeks volunteers travel back to airport and switch around for the next 2 weeks, picking up new arrivals and dropping off departing volunteers.

There are usually 2-5 volunteers at on each reserve at any one time with a maximum of 5, allowing you to work closely with the wildlife team.

You will be supported by the local conservation and research team who you will work with and live alongside at the research bases.

Volunteers live within research bases which are located on each of the 5 reserves. The bases are basic and functional but it’s an amazing experience as you are surrounded by forest, grasslands or bush, where you can enjoy the daily animal and bird activity in and around your new home! 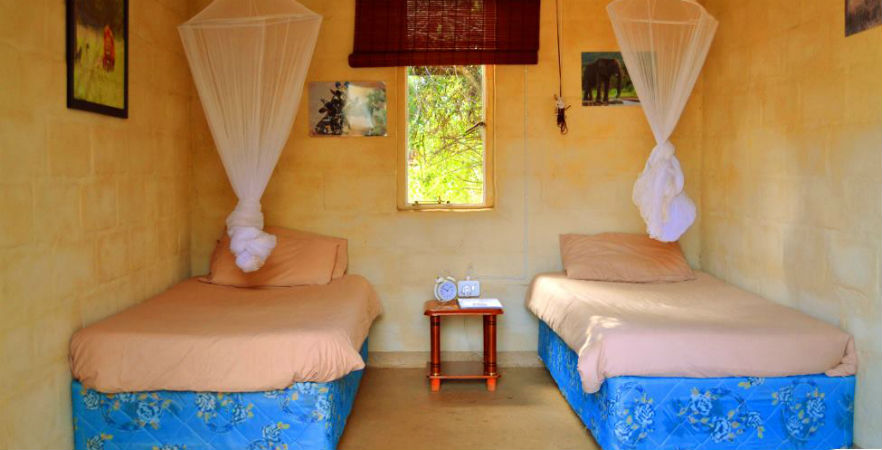 Accommodation is basic but comfortable. Volunteers normally will share a room with 1-2 volunteers of the same gender, and there are separate shared bathrooms and a living/eating area. There is an outside seating area where you can sit at night under a blanket of stars. There is electricity, running water and flushing toilets. 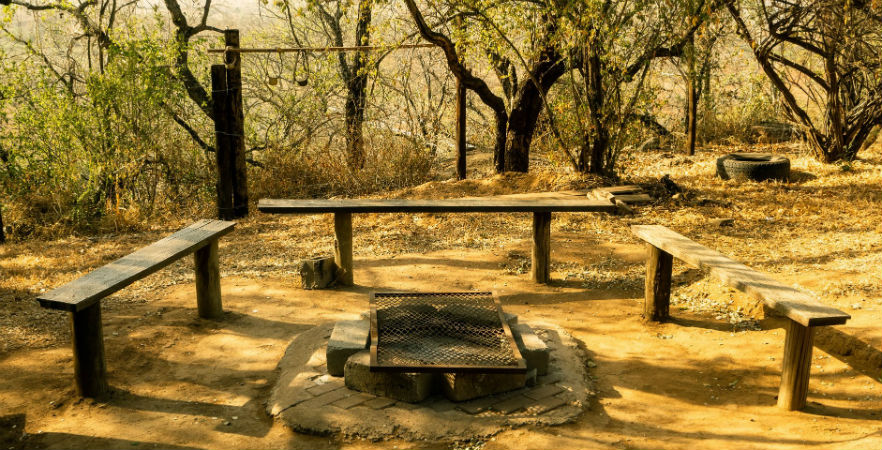 There is limited WIFI at the bases so we recommend bringing an unlocked mobile phone and buying a local SIM card to access the internet.

Each base has a kitchen and ingredients are provided to prepare 3 meals a day. Volunteers normally help themselves to breakfast and lunch and either take turns or cook together for dinner.

Breakfast is normally porridge or toast. Typically lunch and dinner meals are rice/potato or pasta alongside meat or vegan substitute accompanied by cooked vegetables or salad. There is fruit available.

Vegetarians and vegans are welcomed and can be catered for, with beans, lentils, oatmeal and spinach available.

You will need to fly into Johannesburg Airport (JNB) and then take a connecting flight to Richards Bay Airport (RCB).

We will arrange for you to be met on arrival at the airport and be transferred to the project, which takes up to 5 hours depending on which reserve you are working at.

Volunteers work in small teams across 5 diverse reserves in Northern KwaZulu-Natal, each reserve having its own research focus and unique mix of wildlife that is encountered. The area is famous for having the highest biodiversity in Africa per square kilometre, so you have the opportunity to encounter more wildlife than almost any other place you can visit in Africa! The reserves the team works on are Hluhluwe-iMfolozi Park, uMkhuze Game Reserve, Tembe Park, Manyoni Game Reserve and Somkhanda Game Reserve. You can learn more about each reserve here. 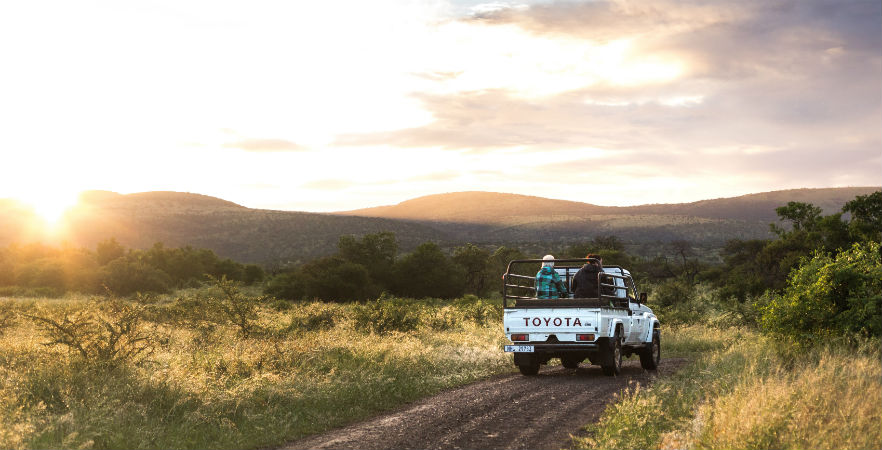 Most free time is spent at your research base during breaks between daily monitoring drives and in the evenings relaxing around a camp fire under the stars listening to the sounds of the African bush! There is also normally one day a week when there isn’t conservation activity scheduled for volunteers, an opportunity to restock food supplies and relax.

If staying longer than 2 weeks, you will also get to spend some time in the local village / town on the fortnightly transfer weekends.

There are hot and humid, rainy summers between October and April, and mild, dry winters between May and September. In the summer temperatures average around 30˚C, but at times peak around 35-40˚C. In the winter the mornings and evenings can be cold (especially on the back of a vehicle as you drive through the bush) but by midday temperatures are usually 20-25˚C.

Travelling in South Africa before or after your placement

For more information on South Africa and some of the things we loved when we visited there please see our South Africa country page. This also features all our other South Africa volunteering projects as you might like to consider combining this project with one of the others we offer to make a trip of a lifetime! 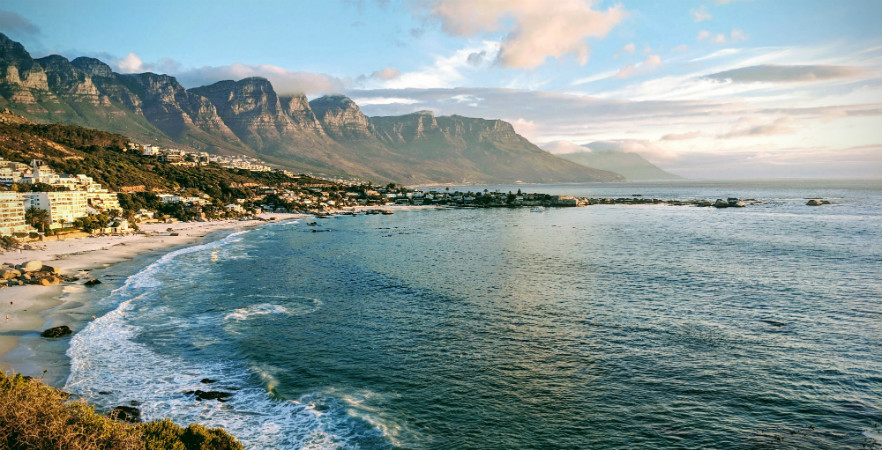 “My volunteering experience was amazing, I learned and experienced so much while I was there. I was there for the darting and recollaring of a lioness, my group was also the first ever to witness the three-one month old cheetah cubs belonging to a mother who’s GPS collar unfortunately no longer works. It was an unforgettable experience, I hope to volunteer with the organisation again in the future.

I found the most rewarding part was just being able to be a part of something that’s actually conserving endangered species. What’s rewarding is spending a long rainy day tracking for an animal and finally finding it and seeing that it is okay."

“We had an amazing time. We helped our two monitors track animals with collars to check they were fit and healthy and help keep tabs on them (making sure they weren't injured and didn't escape etc.).

The monitors are wonderful... so friendly and accommodating... And uMkhuse is just wonderful. Stunning views and great fun scooting about on dirt tracks trying to track down the animals.

I have never done safari and after this experience, I don't think I ever will. Volunteering is much more rewarding and you get a unique experience that just couldn't be possible on Safari, plus you give back to the animals with your time as well as the money. I highly recommend it to everyone.

"Days can be long, but the rewards of this experience will last a lifetime. I have made new life-long friends that share my passion for conservation and deepened my love of Africa and my resolve to do whatever, in the small way that I can, to make a difference.

The project affords a meaningful hands-on participation opportunity to do just that – make a difference! So, if protecting endangered species is important to you, look no further. It is a wonderful project run by committed and passionate conservationists, and will be a life-enriching experience for anyone of any age."

"Being in the field monitoring various priority species daily, we are exposed to mind-blowing wildlife experiences. The contribution of a volunteer may appear small at first glance, however, overall this contribution adds up day-by-day, with the monitoring team providing invaluable information to help maintain the equilibrium of the whole ecosystem. This includes endangered and non-endangered species, their habitat, and ultimately protecting them from the threat of extinction."

Reserve your place and start your volunteering adventure to South Africa!