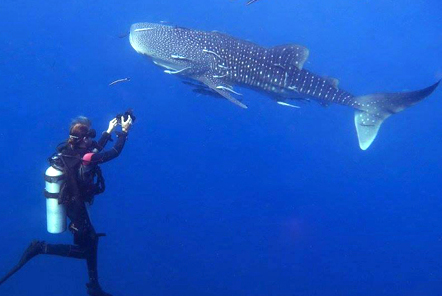 It has been an exciting week for conservation volunteers in Koh Tao as volunteers spotted two amazing whale sharks right off the island's coastline!

Whale sharks – the world’s largest fish – are occasionally spotted around the Chumphon Pinnacle in Thailand however sightings closer to Koh Tao are much rarer.

As the project team were returning from a dive in the local bay, news was heard that a whale shark had been sighted over on Shark Island – just 15 minutes away. Although the chances were low that it was still there, the team headed over in their long tail boat immidiately to try and catch a glimpse of the very rare whale shark.

We are delighted to say that not only did they spot one whale shark, they saw two! The team at the Marine Conservation project were able to get some amazing photos!

“We feel so privileged to be able to experience this moment, which is beyond words, and hope to share similar experiences with many of our old friends again sometime in the near future.” - Chad

Whilst whale shark sightings are rare, volunteers at the Marine Conservation project do regularly sight rays, turtles and other shark species throughout the year.

If you would like to volunteer at the Marine Conservation project in Thailand, check out our volunteer project page for more information: www.podvolunteer.org/projects/marine-conservation-thailand/