The Future of the Cheetah 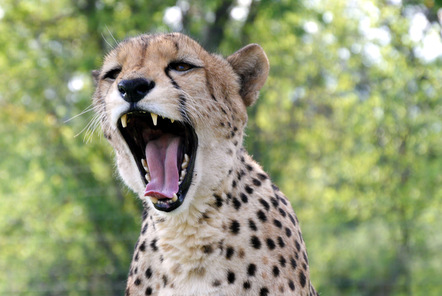 The future of the cheetah

Cheetahs are the world’s fastest land mammal reaching speeds of up to 120km per hour, but unfortunately they cannot outrun the problems which face them. Currently listed as “vulnerable” on the IUCN red list they are the world’s most endangered big cat. The article discusses the main problems cheetahs face and how we can overcome them through conservation and reintroduction.

In the early 20th century the global population of cheetahs was estimated at around 100,000 with cheetahs found in Africa, the Middle East and some of Asia, however their rapidly diminishing population has resulted in them being found in a mere 23% of these areas today. The current known cheetah population in the wild is estimated to be as little as 7,100.

The reason for this dramatic decline is complex, but can be grouped into the following categories:

The most serious threat facing cheetahs in the wild is habitat loss. Cheetahs require vast open spaces with few larger carnivores in order to thrive. Habitat loss has led to loss of prey and increased competition from animals like lions and hyenas.

In protected areas like national parks and game reserves, cheetahs do not fare well against larger predators like lion and leopards. In these areas cub mortality can be as high as 90%. Due to this high mortality rate, 90% of cheetahs live on private farmlands and often come into conflict with farmers who see them as a threat to livestock and local communities. Human-cheetah conflict has resulted in negative attitudes to the animals in farming communities.

Whilst they may be disliked by some, historically cheetahs have been kept as pets, used for hunting and seen as a status symbol by the world’s royals and most wealthy. Today, there is still a high demand for cheetahs as pets and to supply this demand, cheetahs have been illegally captured and smuggled over borders. Of these cubs, only one of in six survive the journey.

Another unfortunate plight of the cheetah stems from the limited genetic diversity of their population. The last ice age (approximately 12,000 years ago) eliminated 75% of the world’s largest mammals. A handful of cheetahs survived this mass extinction but the event caused a significant population bottleneck. This extreme reduction in genetic diversity resulted in reduced sperm count in male cheetahs and increased susceptibility to disease.

Panthera, an organization devoted to the conservation of wild cats, suggest that if no special measures are taken, this species could be extinct by 2030. They predict that the species will soon change from “vulnerable” to “endangered” if numbers keep decreasing.

In order to effectively protect the future of the cheetah a dual approach is needed.  The remaining population of the cheetah must be protected and a program to grow and protect the future population must be implemented. Panthera’s Cheetah Program aims to protect cheetahs by addressing direct threats to them, their prey and their habitats. Panthera does this by closely monitoring populations and their prey, collaborating with local governments, and working with local communities to mitigate conflict and create cheetah-positive attitudes in communities.

One method of tackling the diminishing population of cheetahs is a three phase project which sees the animals bred in captivity, re-wildling of their offspring, and then reintroducing these cubs into the wild.

Cheetah cubs born in captivity are hand-raised and their behaviour is monitored to help identify potential candidates for the second phase. This involves collecting data on feeding habits, hunting behaviour, health and reaction a lure which is used to train the cheetahs to use and practise their natural hunting techniques.

Once potential cheetahs are identified they will be moved into a controlled area which is stocked with suitable game but has no other predators. Here they will learn to become self-sufficient and human contact will be removed. The hunting behaviour of these cheetahs will then be monitored through regular observations and by using tracking collars. Once they are comfortable and confident in this more natural environment, a partner will be introduced for them to mate with. The female will then raise the cubs herself as if they are wild with no human interaction or contact.

Once the cubs have reached around 18-24 months, the mother will chase them away, as she would do in the wild. At this stage the cubs will be placed in areas where there is a demand for cheetah either to start a new population where one previously existed or to bring new blood lines into an existing population.

Pod Volunteer supports the conservation of big cats and their habitats in South Africa. When choosing which projects we work with, we assess them against our Animal Welfare policy. This specifies a number of requirements, including the following for big cat projects:

Ultimately we believe that where possible, wildlife and wild animals belong in the wild, where they are in their natural environment and can display their natural behaviours. Many of our projects provide volunteers with the opportunity to experience this. We do however also accept that there are some cases where this is not possible and the best alternative is animals being kept in a captive environment, as close to their natural habitat as possible.

If you would like to volunteer and support the great work of animal and conservation projects in South Africa, you can find out more below: