Rope bridges helping to save monkeys 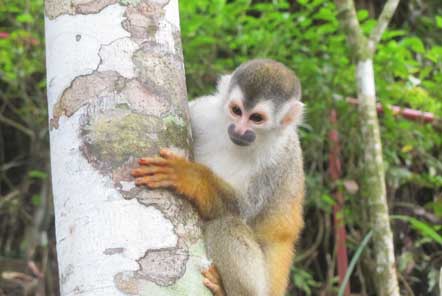 The Wildlife Rescue project in Costa Rica is involved in all of areas of conservation and here we’ll explain the importance of monkey bridges and how, with the help of volunteers, they have helped the population of titi monkeys to recover.

The Titi monkey is the smallest species of monkey is Costa Rica. This species is listed as endangered with approximately only 3700 remaining according to recent studies by wildlife biologist Lenin Rosales. This number is actually good news as just a few years ago there were only 1200 individuals and they were considered critically endangered. The population increase to due to conservation efforts such as monkey bridges, reforestation and education programmes teaching tourists not to feed the monkeys.

The leading cause of death for the Titi monkeys is electrocution by electric wires and being hit by cars. The Manuel Antonio region of Costa Rica (where many Titi monkeys can be found) is popular with tourists and there are lots of people, hotels, cars and electrical wires which all pose a danger to the monkeys. Whilst the monkeys can use some of the wires to cross the roads safely as not all of them are electrical, the monkeys unfortunately cannot differentiate between these as they appear the same.

Over 15 years ago as part of their plan to save the species, the Wildlife Rescue project teamed up with the local hydroelectric company and local experts and have erected over 130 monkey bridges using rope which cross above the roads of Manuel Antonio. These bridges have been instrumental in the surge of numbers (an approximate increase of 2500 individuals).

Here’s a map of where the monkey bridges are located in the area:

Keeping the bridges safe and functional is a huge job due to the tropical storms and other factors so the project also works hard to maintain these. The project is also collecting data and asking for feedback from the public as part of a study that they are conducting to determine which other species also use the bridges to improve their effectiveness in preventing electrocutions and road-related injuries and deaths.

I was so excited to see these bridges in action, just after I visited the project. I stayed in a hotel in the region and spotted one of the project’s monkey bridges just outside the hotel so I went down to investigate and within a few minutes I could see the Titi monkeys using it!

If you’d like to learn more about the Wildlife Rescue project and how you can help or join the team, click here: https://www.podvolunteer.org/projects/wildlife-rescue-costa-rica