My volunteering experience - by Lily 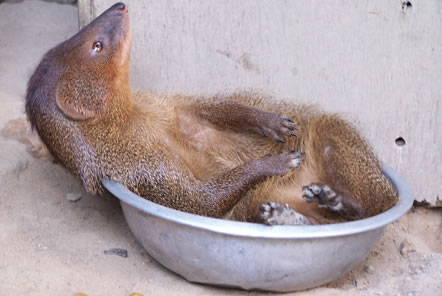 Lily gives us insight into her volunteer experience at the Wildlife Rescue project in Thailand. Volunteering alongside her friend she tells Pod Volunteer what she learnt, daily life at the centre and about her endangered species awareness project, "Endcount".

"Here I am, with my backpack ready to jump on the plane for Thailand. I was very much looking forward to sharing this experience with my best friend.

Pod Volunteer was organising our trip and they made sure we had the necessary information about how to plan your trip, what to bring and what vaccinations we needed. They charged us a fee for all our placements in order to cover the overseas costs of volunteering, running their organisation and the centre… Well at least you know where your money goes! Volunteering is not cheap but it’s well worth it. Some immunisations need to be done at least three months in advance, as they require a series of injections. The “must have’s” were: Diphtheria, Hepatitis A, Polio, Tetanus and Typhoid Fever. Other things to keep in mind other than the shots: flights, insurance, visa application (if you intend to stay for more than 30 days), currency change, photocopy / scan your personal documents and leave copies with your family / friends, buy the necessary equipment like working gloves, mosquito repellent, hat, gumboots… I spent days in 'Kathmandu' shop!

Arriving at the Wildlife Rescue project

After a crazy night in Bangkok (where we barely slept!), a car came to take us to the Wildlife Rescue project. The project is located close to Cha Am in Thailand, about 160 km south of Bangkok. It was a fairly remote location, not far from a small village and situated alongside a large lake.

After a two hours trip in the car with Shakira as the background music and a driver who barely spoke English, we finally arrived at the Wildlife Rescue project. By the end of this trip, we were able to say basic Thai words: kapunka, sawa dee, gin, deun and ting tong!

I must say I didn’t know what to expect from the experience, I just wanted to help and be close to animals, learn about the species but also the issues regarding wildlife conservation and animal welfare - something that I will use as a reference for another project I’m working on with a friend, Endcount.

The centre’s aim is to save wild animals and their habitat from destruction. There are currently over 300 rescued animals, with just over 200 primates. This includes five different species of macaque, two species of gibbon, civets, elephants, sun bears, Asiatic black bears, a crocodile and exotic birds.

The centre rescues wild animals from places where they are mistreated and/or neglected, and helps them spend the rest of their lives in a sanctuary as close to the natural environment as possible with the best possible care. One of projects main focus is the rehabilitating of captive or domesticated animals and, if possible, preparing them for a reintroduction to their natural habitats.

In Thailand huge tracts of forest are disappearing at an alarming rate, destroying the habitats of many species of flora and fauna. Wild animals are poached for meat, medicine and the illegal pet trade. This has left some of the remaining forest under-populated and extinct of various wild animals. Most primates are classified under Appendix One in the Convention for International Trade of Endangered Species (CITES) and it has been illegal to acquire a wild animal as a pet in Thailand since February 1992, yet regretfully, this practice still continues today.

A volunteer day typically involved feeding the animals and cleaning their cages. Duties were dependent on the duration of your stay. For us it was quite short, so we had basic duties, you still break a sweat though and the good thing is you get rotated, so you will look after all animals by the end of the week. Vanessa was mainly looking after the apes and I mainly looked after the bears. We had to wake up at 6am and be ready to work at 6.30am. Our shower and bedroom were very basic; there was no time for make-up, brushing etc.! The first duty was to go to the communal kitchen and prep the food for the animals, which included washing and cutting the fruits, dispatching the food in a basket for each animal, carrying and distributing the food to the animals. We would wait for the bears to eat before we could clean up their habitats and open the cage again.

It sounds easy but takes about two hours, depending which section you were in! Then you have a 30min break and you go in again to clean up their mess. Just remember that you have to do that for all the animals, so for 26 bears or 50 monkeys!

We were also helping in a new area of the centre where gibbons undergoing rehabilitation live; they have a support-fed island which is part of the rehabilitation and release program. The program involves putting healthy captive gibbons into a series of environments which promote their physical health and natural behaviour necessary for survival in the wild. It’s a four-phase program: quarantine, in-cage rehabilitation, support-fed island release and finally an acclimatisation period in conjunction with release in the rainforest.

The working days were on and off like this, morning and afternoon, until 5pm. We were also doing other tasks such as food enrichment, maintenance work and housekeeping.

Volunteers were between 18 to 40 years old, everyone came from different countries, had different jobs, but most of them were working with animals, there were a lot of students or people in their Gap Year and all came for different reasons.

At 5pm, all volunteers usually went out, either Hua Hin or Cha Am night market or to a nearby spa! And what a SPA!

In your one week you have one day off, we decided to go to Khao Sam Roi Yot National Park to visit the cave…It was such a great day off.

By the end of the week we were exhausted, sad to leave but content about this amazing, fun and emotional experience, we were able to look after these beautiful animals and watch them play despite their disabilities, and whilst being educated to the threats that face all wildlife, but particularly species in Thailand.

During our trip I learnt about the political issues, corruption and tourism abuses such as logging operations, you learn so much by talking with the staff members and volunteers. Though the news is not quite positive, logging is an issue in Thailand and illegal markets such as ivory, fur and bear bile are still very common and economically hard to fight. It broke our hearts. But you keep your hopes up and you keep working towards protecting and spreading the word or use whatever talents you have to change things, like I’m trying to do with Endcount. Though I realise I had to change a few of my habits! Education, spreading the word is critical to the survival of the endangered species and deforestation… So I count on you too!"

Lily is also behind a fantastic artistic social awareness project called "Endcount" - a project collaboration between Lily and Joe. You can check out their amazing artwork here: http://www.endcount.com

Endcount mission: To bring attention to the human impact on the cohabitants of our planet by putting the message in a context that raises awareness and provokes conversation, and raise the profile of charities working to save these species. Our first initiative is a series of artworks that aim to highlight the declining numbers of certain endangered species through a mixture of fine art and data visualisation. Each piece is a mix of code, print, canvas and paint that captures the extreme fragility of these creatures. Each artwork is a representation of the total number of remaining members of a given species ranging from a few hundred to a number of thousand.