My return to the Children’s Home project in Belize 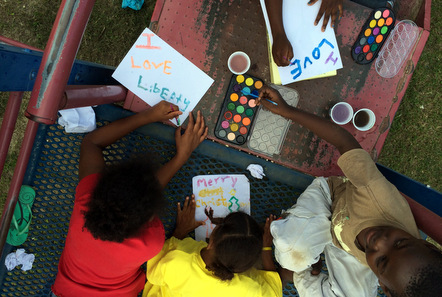 Erin from the Pod Volunteer office returned to Belize to revisit the projects we work with there. In this part of her Belize blog she returns to the Children’s Home project.

I was looking forward to returning to the Children’s Home. The last time I was here there were 25 children at the home and this time there were 44 and it was great to catch up with the children and the caregivers.

On my first morning I decided that I wanted to be up early in order to help out with breakfast in the kitchen. At 5.45am I was sure that it would be completely silent as I thought all the children would still be in bed and that I’d have a head start in the kitchen with the cooks. I was wrong! Before I’d stepped out of the door I could hear singing, it was the children singing some of their favourite songs. When I got to the kitchen the cooks were already working hard getting breakfast made (fresh tortillas and beans), so I helped out by dishing up the food and getting cups ready for every child.

After breakfast I had a tour with Agatha (the home’s director) to see what had changed since my last visit and to hear more about how things were going in general for Liberty. Agatha is an inspiring woman and is doing such a great job of directing the home with the Liberty ethos at the heart of every decision made.

As it was summer holidays, most of the children were at the home during the day (although some had summer school classes). The home had created a schedule to keep the children engaged and entertained during the 8 week holidays which involved fun activities such as drama, dance and singing sessions and some educational (but enjoyable) activities. I spent the morning with the younger group who were split into two teams (girls and boys) and were taking part in maths competitions where members of the team could win their team points by getting sums correct or by being able to write specific numbers in both numerical and letter form. I’ve never seen so much excitement over maths, the competitive aspect definitely worked at engaging the children!

Afterwards the children had time to play inside as it was raining outside so there were lots of different games going on with the children playing in small groups around the room. I was playing jenga with a group of 4 boys which was great fun, although it soon became apparent that we were going to have some issues keeping everyone happy. One of the boys liked it when the game went on for a long time so the tower could grow really tall, while another liked it when it fell over!

Later in the day, lots of the girls were getting their hair braided so I took the opportunity to sit with one of the caregivers who was braiding to learn how to do it and to get to know her and the girls a bit more.

The afternoon was full of basketball games and outdoor play as the rain had cleared up. Some of the older boys used this opportunity to fix their bikes. We were being quizzed by one of the girls who was interested to know our favourite colour, number, singer and film and then it came to our favourite subject at school. When she heard that one of the volunteers liked maths she immediately stopped the game and said “don’t go anywhere”. She soon returned with her exercise book and a maths textbook and told us that she had some maths homework to do over the summer holidays so Trevor explained how to do the exercise and she completed her homework with Trevor’s assistance when she needed it.

One of the things that I like most about this project is how volunteers from all over the world, with different backgrounds can engage with the children by using their own skills, hobbies and interests. We’ve had yoga sessions, sports coaching, dance lessons, jewellery making, sewing, arts and craft activities, drawing, reading sessions and many more activities.

During my visit the children went to a ‘fun day’ which was organised by the government and open to all of the children’s homes in Belize. The event was held at a football field and there were fairground style activities there as well as singing and dancing performances put on by the children. On the morning of the fun day I knew I’d have to be up even earlier than usual in order to help out in the kitchen as the bus was due to arrive at 7.30am to take the children to Belmopan for the event. It was waffles day which was great but with just 2 waffle pans and 44 children to feed it was a hectic morning for the cooks! So I helped out as much as I could by getting all of the chocolate milk ready and on the tables and then dishing out the waffles with cheese for every child and the volunteers. The waffles were very popular with everyone and there was a real buzz about the day ahead. It was really nice to see the kids so excited about the day. It’s safe to say that it wasn’t just the kids who were excited, some of the caregivers who were due to have a day off had come in anyway as they wanted to see the children enjoy the event!

We had a school group arrive from Scotland and they were given some specific jobs to do around the home as well as spending some time with the children. We went on a tour of the home and the group were introduced to the projects that they would be working on whilst at the home. These included digging trenches to help with drainage around the grounds of the home during wet season (which would also reduce the number of mosquitoes), painting the walls of the preschool, making window screens, replacing broken roofs over doors at the dorms and making improvements to the climbing frame which would make it safe for the children to play on again. Rather than being overwhelmed by all the work that they were faced with they had a fantastic attitude and were a great group, really enthusiastic to get going and work hard so I left the Children’s Home with complete confidence that they would make some brilliant improvements to the condition of the home which would in turn make for a much better environment for the children and staff at the home.

To read about my first visit to the project, click here: https://www.podvolunteer.org/blog/belize-trip-highlights-childrens-home-part-2-of-3

To find out more about this project and how you could join click here: https://www.podvolunteer.org/projects/child-care-belize