Guest Blog: An introduction to lionfish in Belize 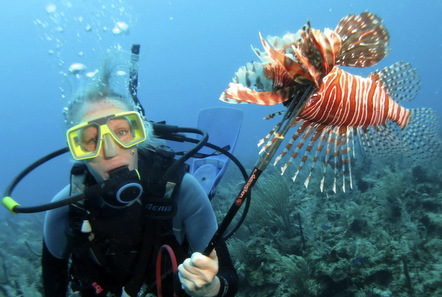 Past volunteer Phil gives his insight into the lionfish infestation of the Atlantic and the research he conducted whilst working on the Reef Conservation Project in Belize.

"It might seem strange to accompany a posting about marine conservation with a photo of a fish on a spear, but in this case, it is entirely warranted.

I recently returned from the Sapodilla Cayes Marine Reserve in Southern Belize, where I spent two weeks working as a volunteer at the Reef Conservation Project which is dedicated to coral reef ecosystem conservation. Located 30 miles off the coast of Belize on the southern tip of the Mesoamerican Barrier Reef (the second largest in the world, after Australia’s Great Barrier Reef), the Sapodilla Cayes constitutes a unique ecosystem.

Along with other volunteers, I assisted the marine biologist with population surveys of conch, lobster, and commercial fish species, as well as coral reef health checks. At least one, and sometimes two surveys were carried out each day. The data collected is provided to the Belize Fisheries Department as well as to other cooperating NGOs.

Now about that fish on a spear; one of projects main objectives is lionfish control. Spears and collection bags are taken along on pretty much every dive, and dive leaders and volunteers try to spear as many lionfish as possible (whilst taking appropriate care not to damage coral or other marine life in the process). As a long time diver who would never have thought of carrying a spear, I must say that it was quite a new experience. Lest you think that the spearing is completely gratuitous, and intended only to appeal to divers’ primal instinct (OK, I’ll admit it, I did feel like Rambo in the ocean), the project also monitors incidence of lionfish population and undertakes dissections of a sample of 20 of the 100 or more lionfish that are speared each week. Data on size, sex, and stomach content is provided to the Belize Fisheries Department as a contribution to an emerging national lionfish management plan.

Why all the fuss? Simply put, lionfish are wreaking havoc on coral reef and other marine ecosystems throughout the Caribbean, Gulf of Mexico, and Southern Atlantic seaboard of the United States. Native to the IndoPacific, lionfish were introduced (it is uncertain whether by accident or through release by aquarium owners) into waters off south Florida in the mid- 1980s. Since then, they have spread rapidly (click on this link for an interactive map), and are now established in waters as far north as the Carolinas and as far south as Colombia and Venezuela. Their spread has been described as the worst marine invasion ever. Indeed, in 2010 scientists included the lionfish invasion as one of the top 15 threats to global biodiversity. Lionfish are voracious and indiscriminate eaters, preying on a large variety of fish species (including commercially valuable species such as snapper and grouper) as well as larvae of crustaceans such as shrimp and lobster. I saw evidence of this personally during my stay in Belize.

Stomachs of 40 lionfish that we dissected while I was there contained more than a dozen species of fish as well as shrimp and crabs. Particularly troubling was the high proportion of parrot fish and other herbivore species that are important for keeping harmful algae in check. In the stomach of one fish that I dissected, I found 8 juvenile parrot fish. In another specimen, 22 cm in length, I found an intact parrotfish 9cm in length. Unbelievable! On top of this, lionfish reproduce rapidly; females can lay eggs as frequently as every 4 days during the spawning season, with a single female able to lay up to 2 million eggs per year. And if their gluttonous feeding behaviour and fecundity weren’t enough, lionfish have no natural predators in the Atlantic, in part due to the venomous spines (more about these later) that line their dorsal and anal fins. All in all, the perfect invader. It’s no wonder that studies have found that lionfish can reduce the population of native fish on a reef by up to 80% in a matter of weeks."

Thank you to Phil for sharing your knowledge and experience from the Reef Conservation project!

If you would like to join the team and volunteer in Belize at our Reef Conservation project, click here for more information: www.podvolunteer.org/projects/marine-conservation-belize/