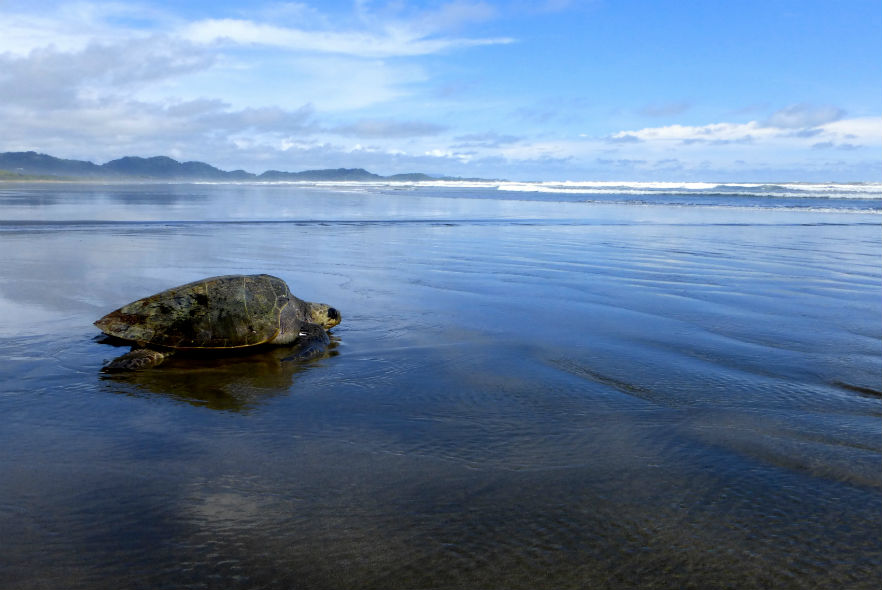 To celebrate #WorldTurtleDay we wanted to share some interesting facts about the fascinating Olive Ridley turtles, which make up around 95% of the turtles found at our Turtle Conservation project and why it is so important to help conserve them.

Life in the ocean

Olive Ridley turtles are predominantly found in the tropical regions of the Atlantic, Indian and Pacific oceans and spend most of their lives in the open oceans, hunting for food. Their diet is surprisingly mostly carnivorous, feeding on animals such as snail, crabs, shrimp and even jellyfish!

Living in the ocean is in fact one of the greatest threats they face, from commercial fishing activities. In Central America alone, it is estimated more than 60,000 sea turtles, mainly Olive Ridleys, are caught and drown in shrimp trawl nets each year. In Costa Rica specifically, 15000 Olive Ridley turtles die annually as a bycatch. 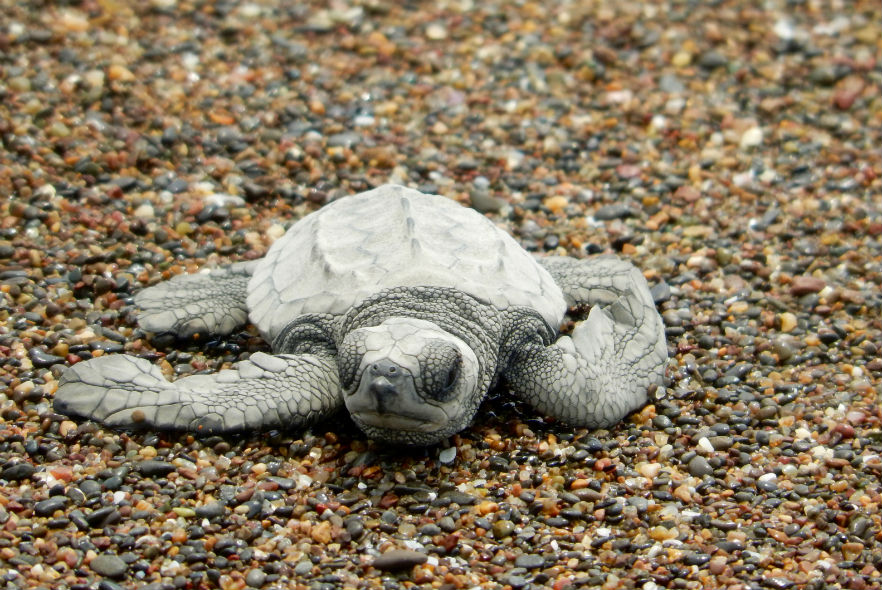 Another significant risk for sea turtle populations in general, is increased coastal development of towns and cities. This firstly increases pollution in the ocean and secondly was famously highlighted in Planet Earth II ‘s ‘Cities’ episode that showed the work of the Barbados Sea Turtle Project patrol in ensuring the turtles safe passage to the sea.

The presence of towns and cities by the beach is a danger to hatchlings, as they usually follow the brightest light to find the sea. In a natural environment, this is normally the full moon reflecting on the ocean, however the hatchlings are instead confused by the artificial lights of the cities. If it weren’t for the projects vital intervention, scores of hatchlings would head straight to busy roads and be hit by traffic. You can learn more in the following video:

Another threat humans present is taking turtles and / or eggs for human consumption, or to sell as a delicacy, from the beach. This is why the efforts of our Turtle Conservation project are so important. Night patrols by volunteers and the local team have resulted in an 80% drop in nests being taken and over 12,000 hatchlings being released annually – another example of positive human intervention.

An arribadas (Spanish for 'arrival' ) is when thousands of female turtles come to nest at once over a short period. Seeing an arribadas is an unforgettable experience, as the beach is covered in nesting turtles!

Anne, a recent volunteer at the Turtle Conservation project was lucky enough to witness one and captured the following photo: 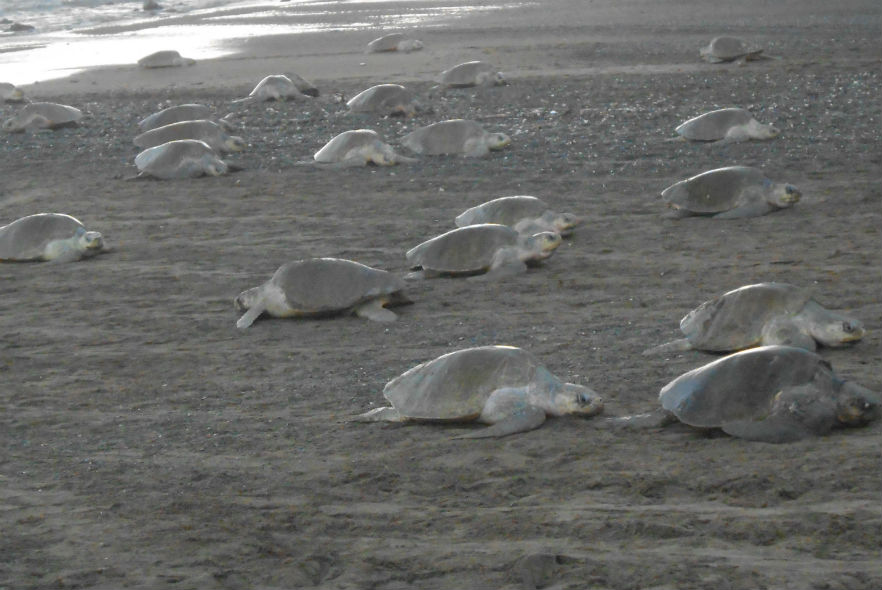 Costa Rica is one of the few countries where Olive Ridley turtles nest on mass in this way. The reason why some turtles nest as an arribadas and others do so solitarily is still unknown, but some have suggested it is to coincide with moon and tide cycles. National Geographic have done a great job in explaining how 100,000 sea turtles have been known to nest at the same time here:

Small in size and falling in numbers

Olive Ridleys fully grown are generally about 2-2.5 feet in length and weigh 35-45 kg – this may not sound small, but they are actually the second smallest species of sea turtles! 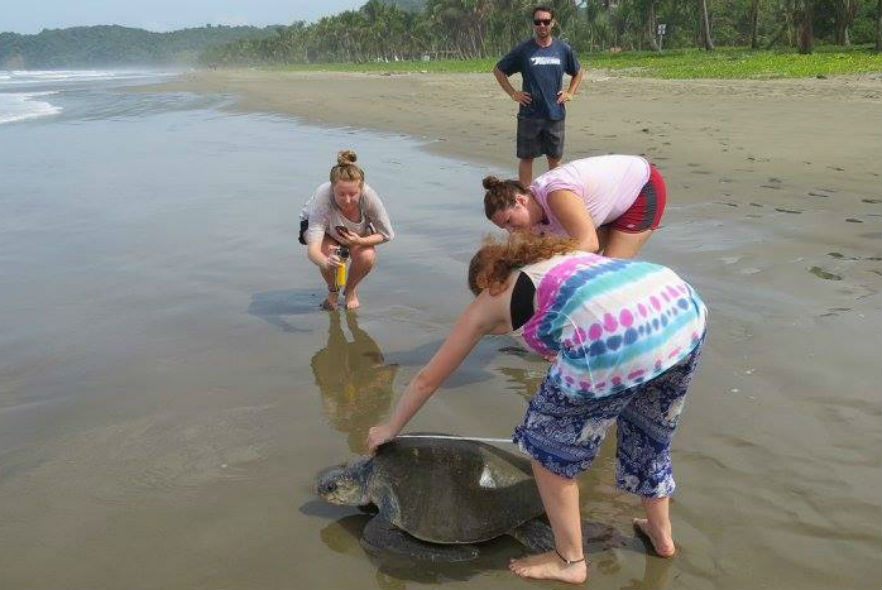 Whilst they are known for being one of the most abundant of turtle species, this is increasingly less the case. As there are approximately 800,000 nesting Olive Ridley females worldwide, each laying 80-120 eggs per nesting and with at least 2 of these per season, you may be mistaken for thinking that their numbers would be booming. However, the threats outlined above have resulted in a plummet of the number of hatchlings returning as nesters when they reach sexual maturity at 15 years old.

Population numbers have decreased by approximately 50% since the 1960s, and Olive Ridley turtles are classified as Vulnerable by the IUCN Red List.

If you would like to find out more as to how you can help our Turtle Conservation team in protecting Costa Rica’s sea turtle population, see here.